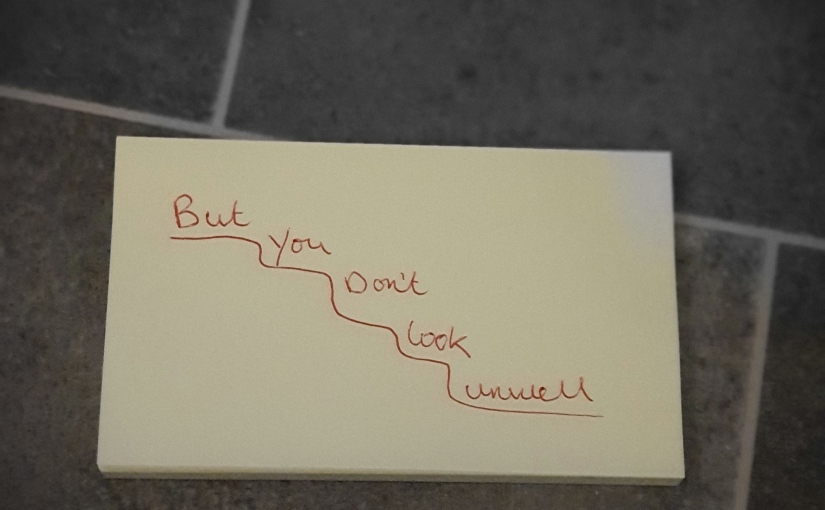 Welcome back Everyone! I’d like to start this post with an apology, sorry for the lack of posts recently, life as it often does, has taken over. We’re back however and it feels great to be writing again. I’m going to discuss something in this post that I feel is relevant to pretty much everyone in their daily lives, whether you’re a new parent, suffering with crohn’s or simply just being the best version of yourself. So, what’s this thing that’s relevant to all of us then? Well, I’ll come straight out with it, personally I feel there’s a concept in today’s society that unless you look unwell, you’re not unwell. Now, that statements possibly a tad dramatic but there’s also a hint of truth behind it, silent illnesses are a real thing. We’re very good at putting on that perfect visage, getting up and going about our daily lives like everyone else, but do we really know what a person is truly feeling?

As you all know, I suffer with crohn’s disease. This is something that until starting A.P Writing I’ve kept to myself, it’s not particularly visible from the outside but it has a huge impact on my life. I’ll come onto how it impacts my life later in this post, but for now I’m going to talk about what’s made me want to discuss it, why now after years of being embarrassed? The truth is becoming a father has made me see things from a completely different perspective, if you don’t share these invisible illnesses they’ll just swallow you up, it’s okay to not be okay sometimes. Of course, crohn’s is my invisible illness but there’s more to life than crohn’s disease, you might be someone who’s battling depression, anxiety, perhaps you suffer from PTSD. The point I’m making is we cannot immediately see this in a person, we’ll take them at first glance, and at first glance everything’s as it should be. When that person says I’m not well we’ll automatically think ‘well you don’t look unwell’ , some people might even say it, I’ve had that many times and let me tell you it’s probably the worst thing you can say to someone suffering with an invisible illness. How is anyone meant to build up the confidence to open up if they’re put down before they can begin? I don’t think that many people if any do this deliberately, why would we? I think it’s perhaps down to years of associating real illnesses with some kind of visible form, that and the emergence of social media. News is so readily available nowadays and we’re so easily influenced by what we read, we’ll see that some celebrity is struggling and what a mess they are, their pictures will be spread over every magazine, always the worst photo of that individual. To the average person they’ll look at social media and think ‘I don’t want people to think I’m like that, these problems I’m having I’ll just keep those quiet I think’. Social media, in fact media in general is a fickle business, we all saw the tragic events that unfolded surrounding Caroline Flack. It’s unforgivable the role media played in her death, they portrayed her as guilty until proven innocent, the invisible illness she was suffering with, whether that was depression or something else was completely ignored, we weren’t asking if she was alright, assuming that on the face of things she was fine and she was probably too scared to open up to us.

Earlier in this post I said I’d explain how an invisible illness like crohn’s can affect my daily life, like most illnesses there are good and bad days, I’ll be discussing an average day. Now, believe it or not, most days start with a quick dash to the bathroom, poop number one never can wait. If I’m lucky I might get a sip or two of tea before it’s time for poop number two, sometimes poop number three comes before breakfast, but it’s normally after. Of course, we can’t go to work without poop number four making an appearance. I’m sorry for being so graphic everyone but that is honestly an average start for me and a lot of people who suffer with crohn’s. If I’m tired or fatigued, mainly at the end of the week, I might be sick in the morning as well, add to that the five tablets I take for good measure and the day’s off to a wonderful start. Ezra isn’t sleeping particularly well at the moment either so both me and Chantelle are quite drained before the days even begun. I’ll arrive at work feeling empty, despite it only being 8-30am I’m ready to eat lunch I’m that hungry, I’m drained after losing many nutrients through going to the toilet so much and I now have to pretend to be happy, I have to put on that visage we talked about earlier. The day will progress, I’ll eat lunch at 10/11am, end up buying more lunch to try and feel full up, I’ll think bout falling asleep at my desk, already thinking about getting home and going to bed. Eventually work will finish, I’ll come home knackered, spend some time with my beautiful partner and son, go for poop number five and six if they didn’t already come in the morning and finally struggle to eat dinner, after taking another two tablets I roll into bed and repeat all again tomorrow. As I’ve said that is an average day, a bad day would be a flare up which would likely keep me in bed unable to be much help or use to anyone. If you took me at face value however you wouldn’t think anything was wrong, I talk as you’d expect anyone would, act normal and don’t express what I’m feeling, but you can see what it’s like just to get to work sometimes. I consider myself lucky because my crohn’s is manageable, for some it really isn’t and they’re just unable to complete the things we all take for granted, like going to work or exercising. This is applicable for many silent illnesses not just crohn’s, depression is a huge taboo subject at the moment, we’re trying to raise awareness but still not enough people feel confident enough to come forward and talk about their problems. So, with all that I’ve discussed in mind, lets open up more and welcome others opening up to us, no more of the ‘but you don’t look unwell mentality‘.

The majority of people in our society are incredibly understanding and allow others to express whatever they might be dealing with, for that I’m very grateful. Moving forward I won’t be so quick to judge a book by it’s cover, I’ll also be trying to keep a more positive outlook on things, yes we all have to deal with, things we might not want to open up about but they don’t have to become limitations. I know this has been a slightly edgy post, (it’d been building for a while) but I promise the next one will be as I’ve said, far more positive. It’ll include the first few days of my new initiative Ditching the Dad Body which starts tomorrow. As always I hope you’ve enjoyed reading my posts, I’m incredibly thankful, please feel to leave a comment or a like, catch you all real soon.